The weather forecast for Pic de la Munia is: Heavy rain (total 38mm), heaviest during Sun night. Later becoming colder with a dusting of snow on Sun nightTemperatures will be slightly above freezing (max 4°C on Sun afternoon, min 2°C on Sun morning)Winds increasing (calm on Sun afternoon, fresh winds from the WSW by Mon night). 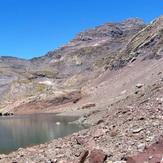