The weather forecast for Pic a Tenerife is: A light covering of new snow mostly falling on Mon nightFreeze-thaw conditions (max 3°C on Mon morning, min -14°C on Wed night)Wind will be generally light.

* NOTE: not all weather observatories update at the same frequency which is the reason why some locations may show data from stations that are further away than known closer ones. We also include passing Ship data if it is recorded close to Pic a Tenerife and within an acceptable time window.

Upload a Pic a Tenerife photo | Upload for another mountain 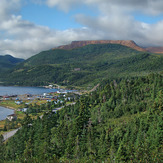